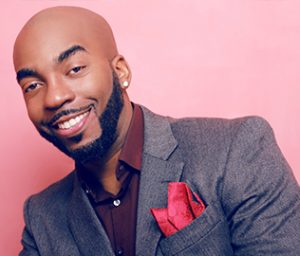 Milan (Interviewer): Can you tell the readers a little bit about yourself?

Roderick: Sure. I am an Alabama native born and raised. Moved to Atlanta to pursue acting and comedy. I’ve been steady at it for the last fifteen years. I’ve done over twenty stage plays, done about 600 appearances, and doing comedy all over the country. I just came off of a working contract with Disney Cruise Line. So, I’m just trying to get it one day at a time.

Milan: Can you tell us about your experience working with Disney Cruise Line?

Roderick: I had a position there called the Club Host which is another word for adult m. c. The Disney Cruise ships actually have an adult area but my job was to do all the adult entertainments  as far as comedy shows, trivia games, dance parties for the adults and basically run the night club aboard the ship. Basically, I’ll do four to five-month contracts, come home for six to seven weeks and then go back out. I did that for about two years.

Milan: Would you say you prefer working as a club host for Disney over doing regular stage plays?

Roderick: No, I prefer the stage plays, the instant gratification of stage plays and comedy on land a little more. I did like the experience of traveling all over the world, I probably in the last two years been on every corner of the United States on the ship. But with comedy it’s something different every night, and you get to go home and rest up versus being on the ship. You have a show every night for seven nights a week. It becomes kind of draining but still a great experience.

Milan: What inspired you to get into the entertainment industry?

Roderick: I always wanted to. I grew up loving comedy, I grew up loving Deff Comedy Jam and Comedy View. I knew it was something I wanted to get into, but I come from one of those really hard-working blue-collar families. So, when I told them I wanted to do it when I was younger, it was kind of frowned upon, you know. It was kind of one of those things you got to show me and not tell type families, you know I kind of went the route they wanted me to go. Went to college, got my degree and was a teacher for a couple of years, hated it. Left that, booked a plane to Atlanta and went on tour for about six months. The tour ended, and I ended up corporate here in Atlanta. I just keep auditioning, auditioning, auditioning and I never stopped; I never left and never went back to Alabama.

Milan: Do have any comedic influences?

Roderick: Well, celebrity wise, I always looked up to Eddie Murphy, Martin Lawrence, and Steve Harvey, but personally my boys, Funnyman Johnson and Steve Brown those are probably the two that I know personally that are closest to me. But celebrity Eddie Murphy, Martin Lawrence, Steve Harvey, Chris Rock hands down. And then my grandmother was hilarious; she wasn’t a comedian; she just was funny.

Milan: How do you prepare for a role when either acting or doing a comedy show?

Roderick: Acting I pretty much block everything out and just study whoever the character is and what his mannerisms are. I kind of give them a back story, where they are from, why is he the way that he is, what are his ticks, and what the audience getting is from this scene. I’m pretty much a nerd when it comes to that; I lose a lot of sleep to focus on it. That’s how I prepare for each role. Now comedy, I used to go through a nervous breakdown before I went on stage. I used to get really nervous and panicky but now I just kind of chill. I look at my outlines, I have notes of things I want to make sure I talk about when I go on stage. I just glance at it for maybe ten minutes before I go on stage and just mix that with the improv and let it takes its course.

Milan: What was the biggest challenge you had to overcome in your career?

Milan: What would you say has been your biggest accomplishment thus far?

Roderick: There are a few that come to mind. Of course, Disney Cruise Line was a great accomplishment, I was one of the first African American to hold that role. Then I got a standing ovation at the Stardom Comedy Club in Birmingham which is one of the biggest comedy clubs in the United States, and I played a doctor on survivors’ remorse that was pretty dope. Those are probably my top three biggest accomplishments thus far.

Milan: Are there any projects that you’re currently working on?

Roderick: There were a couple pilots that I was working on before the quarantine hit. I was working on an upcoming show called the Fellas starring Karon Joseph Rally. Then I also did a pilot with Rory Woods, Jr. called Jefferson Cali Probation Officers. So, both of those, I’m hoping will be big things. I also have a comedy competition coming up once all this blow over that will take place in LA. So, we will see where it goes.

Milan: How would you inspire others to keep working towards their dreams?

Roderick: I just tell people whatever it is you want to do just go after it. Don’t let nothing stop you —not life, not boredom, not disappointment, not negativity because “no’s” teach people a lot of things. It either teaches you that you are not the success you thought you were or makes you more determine to get the “yes.” If you keep trying, something is going to definitely give, you just have to be persistent. You just have to know that everyday you get a “no” you have to think what do I have to work harder on to get a “yes” and keep working for the “yes.” Don’t worry about the “no’s” they come, but the “yes” are great.

Milan: Where would you like to see your career go in the next few years?

Roderick: I would love to lead the next big-time comedic series something in the wave of The Office or Everybody Loves Raymond; something funny of that nature like My Wife and Kids. That’s my style of humor, which is fast, quick, wit dry humor. I love it!

When Attorney Faith Fox opened her private practice, The Law Office of Faith Fox PLLC, just a few years ago, her mission was one of dedicated service. Now with her new appointment as Managing Partner for The Cochran Firm in Charlotte, NC, Fox is positioned to expedite her initial goal far beyond her original dreams! The Cochran Firm, built on the legacy of iconic legal master mind Johnnie L. Cochran, Jr. is a national law firm with offices located throughout the country. The Cochran Firm Charlotte, now helmed by Fox, is their first office in the state and will offer residents unprecedented access for the compassionate handling of legal matters and concerns.

Charlotte, NC – When Attorney Faith Fox opened her private practice, The Law Office of Faith Fox PLLC, just a few years ago, her mission was one of dedicated service. Per her own personal ordeal in family court without proper legal representation, she was deeply impacted by an overwhelming feeling of helplessness and wanted to mitigate that experience for others. Now with her new appointment as Managing Partner for The Cochran Firm in Charlotte, NC, Fox is positioned to expedite her initial goal far beyond her original dreams! The Cochran Firm, built on the legacy of iconic legal master mind Johnnie L. Cochran, Jr. is a national law firm with offices located throughout the country.

The Cochran Firm Charlotte, now helmed by Fox, is the first office in the state, and will offer residents unprecedented access for the compassionate handling of legal matters and concerns. “It is a privilege to be working amongst some of the greatest legal minds in the legal field and call them partner,” expresses Fox. “I never met Johnnie Cochran personally, but he inspired me immensely and made me want to be the kind of lawyer he was; a winner who exhibited great empathy for his clients and held a high regard for the law. At the time, I had no idea what a tall order that truly was. I am excited beyond verbal explanation to be a part of his legacy and to introduce the state of North Carolina to The Cochran Firm.”

Astute observers might say that Faith Fox has always displayed excellent leadership qualities. A native of Philadelphia, PA, she graduated with a Bachelor of Arts from Temple University’s Department of Media Studies and Production before launching her first career in the entertainment business. Fox made great strides early on holding positions that included working as production assistant to legendary jazz musician and producer George Duke; serving as general manager for CME Records, distributed by MCA and owned by Carl Martin from the R&B group Shai; and road manager to singing greats Boys II Men, Brownstone and countless other artists. Her successful 20-year career in the entertainment industry also saw her as a consultant negotiating multi million-dollar contracts for some of the music industry’s most notable recording artists.

Life happened and Fox’s path was eventually transformed, first by a failed marriage, followed by the death of her mother while she was pregnant with her eldest child. However, divorce, child support battles and family court put Fox on the legal path she was destined for.

“When my ex-husband hired a lawyer to fight me for full custody of our son, I wasn’t able to do the same. As a single mom receiving little to no child support, I could not afford the legal fees. My ex’s lawyer operated unscrupulously and before I knew it, I was sitting in court defending myself despite doing all of the heavy lifting with regard to raising my children. When I left court that day in September 2011, I was determined to never allow myself to be in such a powerless position of advocacy for myself and my children, ever again. I was determined to fix things for myself and prevent others like me from ever experiencing it as well.”

“With 31 offices located in 19 different states, The Cochran Firm Charlotte is a great expansion and addition to our legal brand,” cites Keith Givens, the managing shareholder of The Cochran Firm. “Faith Fox was selected as a member of our firm because she is recognized as an outstanding attorney with a national reputation. She is very active in the National Bar Association and well respected by our partners. She is a great candidate to assist us in building a presence in North Carolina. We are excited to have her join our team!”

The Cochran Firm has established itself as one of the premier plaintiffs’ litigation and criminal defense law firms in the country for over 40 years. With offices throughout the United States, The Cochran Firm boasts some of the most highly respected and experienced men and women in the legal field in the country. As managing partner at The Cochran Firm Charlotte, Fox will oversee the North Carolina state operation and offer services that include personal injury, civil rights, wrongful death, family law, negligence, medical malpractice and more.

Click Here To View Article
(Only Available on Digital Copy)

Congratulations @lynettedutton and @iamdrdutton @repost So honored to be with @iamdrdutton as the Top 10 most Influential Trendsetters on the cover of @k.i.s.h_magazine @wearedominiontv has the back cover!Thankful for @kish127 I treasure her vision, partnership and friendship!

It's time to come back to living by faith! You will never rise any higher than your words.