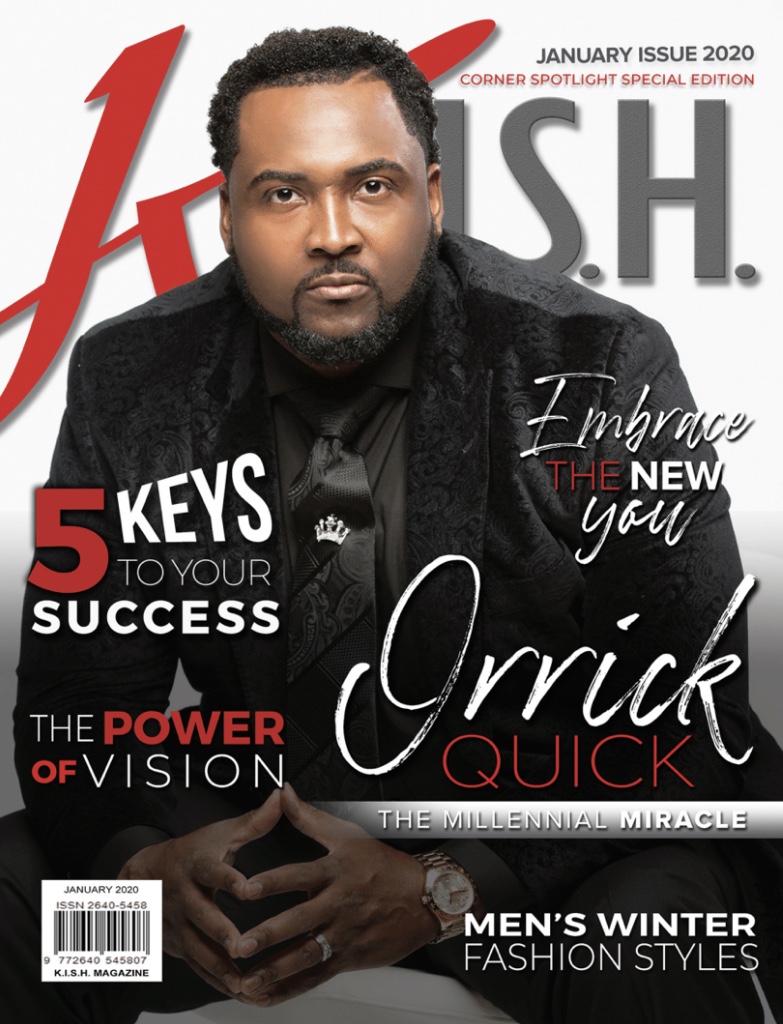 Pastor Orrick Quick, the son of Bishop Alber Oliver Quick and the late Mother Rosetta Quick was born and raised in the city of High Point, NC. He has been married to his lovely wife Ashley Quick for twelve years. To their union they have been blessed with three beautiful daughters: Victoria, Kennedy, and Taylor. Pastor Quick is a prolific teacher, preacher and motivational speaker that helps people realize their God given potential. Pastor Quick has taught in the foreign country of Belize, Central America on various mission trips which has impacted thousands of lives.  His slogan is, “You must be able to convert your pain into passion, so your passion will fuel your purpose.”

His mother Rosetta Quick was diagnosed with Lupus during her pregnancy. Even against the doctor’s recommendation to abort this child, his mother had faith to proceed even while her life was threatened. Pastor Orrick Quick had to overcome many obstacles in his life such as: being in a coma, learning to walk all over again three times, being temporarily blind, remaining in the hospital for a total of 8 weeks, and being confined to a body cast for 13 weeks. All of the above injuries were a result from two deadly car accidents that Pastor Quick encountered.

In 2016, Pastor Orrick Quick was a TV Co-Host for the FOX Daytime talk show, “The Preachers.” As a result of the 15 episode showcase, Pastor Quick was selected as one of EBONY’s Power 100 honorees which can be revealed in the December 2016/January 2017 edition of EBONY magazine. Pastor Quick was a featured guest on the Dr. Oz show twice and appeared on the television show, “The Real” showcasing his Forever Candles.

As of 2017, Pastor Quick has released his first book entitled, “Your Reign is Over” which deals with discovering your God given purpose while overcoming depression. It also teaches you how to overcome the enemy’s greatest tactics such as manipulation and intimidation. In addition to the book, Pastor Quick has a brand new album entitled, “Spiritual Warfare.”  The album has a fresh new sound guaranteed to inspire the world. “Spiritual Warfare” is an album that incorporates Christian hype music to keep you invigorated for your lifetime goals.

Pastor Quick plans to use his voice and his experience as a witness tool, to help this younger generation overcome any situation that they may encounter. “Too many times we allow our mistakes to define our destiny.” Therefore, Pastor Quick believes that you should “never allow your past, to have a meeting with your future, without your potential being present!”

What motivated you to become involved in Ministry?

Being raised in church has had a strong influence on my life but I never thought that I would become a preacher or even a Pastor one day. God has a way of calling those who feel unprepared or even insufficient for his calling. When God first called me into Ministry I tried my best to ignore and push the very thought out of my mind, because I knew I was not qualified to accomplish this assignment. I ran as long as I possibly could until one particular week, when God took my sleep completely away. As a result of having no sleep, I had unbearable migraines every day for the entire week. I rejected my calling until that Friday night when I just simply could not take it anymore. In the middle of the night I told the Lord, “if you allow me to go to sleep and take these migraines away, I will do what you have called me to do.” I immediately fell sound asleep after I submitted to his call. I woke up the next morning knowing that God was preparing me for something that was bigger than myself.

What significant miracles have you experienced that have shaped your faith?

The first miracle was in 2012 when God spoke to me and asked me a question, “do you believe I can give you your house for free and make you debt free?” I answered, “yes Lord I believe you can but how are you going to do this?” His reply was, “do not be concerned about the how but just trust me.” After trusting in God for 5 years, God totally eradicated our monthly mortgage payment and gave us our house for free.

The second miracle was in the year of 2015 when God spoke to me and said, “I’m going to bless you thru your testimony.” God instructed me to make one phone call that landed me on the FOX Daytime Talk Show entitled “The Preachers” as a TV Co-Host. God showed me that he has the power to place anyone exactly where he wanted them to be.

The third miracle was a man in a coma at the hospital. His brother was attending our services and called me on a Friday night asking for my advice, on whether they should continue to keep his brother on life support. God spoke to me and said, “give it one more day.” I told him to keep his brother on life support one more day. I woke up that Saturday morning and God spoke to me and said, “go to the hospital.” When I got to the hospital right before I walked thru the entrance God spoke to me again and said, “I want you to speak that by the time you get to the room he will be out of the coma and speaking.” I believed God and I spoke it out of my mouth to release my faith. Right before I entered his hospital room I heard his voice. He was not only out of the coma but speaking and eating as well!

What inspired you to go forward and pursue your dreams?

God is the only reason I have made it this far, right when I feel discouraged and feel like giving up God reminds me of my destiny. He reminds me that pain is only temporary and misery prepares for delivery. Every single person is pregnant with their God given ability living on the inside of them. Every person must make a decision either to deliver or to abort the very thing that they were created to do. I pray that my life will help direct or redirect others to understand Gods purpose for their lives.

What advice do you have for people who feel like giving up?

Take one day at a time, do not allow your mistakes to eradicate your future. You can recover from any mishap, disaster, misfortune, setback, or mistake that you have done or that has been done to you. Treat God like he is a real person and talk to him every single day about what you are struggling with. When I do not know what to do, I have learned that one of the most simple and yet effective prayers that I pray is, “Lord help me.”

How can people connect with you?