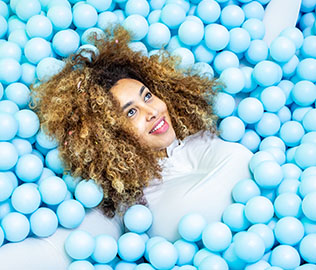 Milan Jackson: What prompted you to start the first ever American Football League for women in Europe? Do you have any type of background in sports?

Kanessa Mulehah: No, I don’t. I think if you would had asked me five years ago…. I never even looked at a gym, but it became an obsession. I remember I was watching random videos on YouTube and a video popped up with women playing American Football, the LFL Lingerie Football League which is in the U.S. I was obsessed not by the way they dressed but I was obsessed by the roughness; it was something about the sport that was so amazing. So, I said to my husband, “This is what I want to do.” I reached out to the local football team here in Amsterdam and they said, “No, we don’t have female teams. We only have male teams. We have been doing this for over 35 years, but nobody ever actually thought about creating female teams.” That was so upsetting in a way to me because why not for women. The head coach told me, “Just find some girls, get together and I’ll teach you the sport.” That’s actually how it started.

Milan Jackson: Did you know how to play football prior to starting the team?

Milan Jackson: How did you grow the success of Queen Football League over the years?

Kanessa Mulehah: Well, I think I always tell people that there is a factor that’s called luck. In my case it was the fact that I had this video and I put it on Facebook. People started responding to it especially girls. I know a lot of people had some opinions about how they were dressed but it’s still the sport that triggers them. I got messages from all over the country of women saying, “Hey it’s not fair that only the city of Amsterdam gets a team. We want one too.” It was like a hold up for me. It’s just a game but it was something I wanted to do. I got this team together in Amsterdam and I got pregnant which meant that I couldn’t play the sport. But I could help these girls grow these teams on the background. Umm, so, in that case I’m lucky, actually double in this case. Lucky, I got pregnant because of my son of course. Also, because it basically gave me the time to sit back and work on growing the sport here. That’s actually how it continued.

Milan Jackson: Do you feel as if the female league could potentially grow to be as popular as the male leagues in Europe?

Kanessa Mulehah: Absolutely because the male leagues are not as big as in the U.S. There are some countries for example, Germany or Finland who have a serious league. It’s still not really; I know they get paid. Let me put it like this, they don’t get paid to be this star in football. It’s not like you can make a living out of it. It’s more you can play and be okay.

Milan Jackson: So, is it like a hobby versus a job?

Kanessa Mulehah: It’s like a regular job with same intensity as the NFL. So, as I said, it’s not that big here in Europe. So, it’s not that hard to outgrow the male league.

Milan Jackson: I know you have several other businesses. So, what motivated you to become an entrepreneur?

Kanessa Mulehah: That started when I was 20 or 21. I was working on my thesis; I put a lot of work in my thesis. So, when everything was done, I finished my school. I was just sitting there with this project that I made. I told my now husband, “Why would I throw this away and do nothing with it.” I thought I put so much work into it. It was so much hard work, so I’m going to try and make this real. It was a business plan that I made. And um, I talked to some people; they looked and said this is a solution I have. It was a technical device that I made for the health care system here in this country. So, it was solution to a problem, in my opinion. There in that moment I started researching more and before I knew it, I actually had the product in my hand. And unfortunately, in this country health insurance companies have a lot of power and it’s very hard especially as a startup to work with them. They don’t take you that serious. They eventually basically bought my product and that is the whole side of my entrepreneurial journey.

Milan Jackson: Which product was this that you came up with?

Kanessa Mulehah: We have this house doctors. Before you go to any specialist here, you go to this house doctor. You tell them your problem and they send you to the right specialist. Here to get in touch with this house doctor you have to call this assistant or receptionist. These people were always women, and everybody knows women. They have kids. They have to take care of their families. They would get stuck between having to work and being there for the kid’s family whenever they are sick or needed. I came up with this solution so they can pick up this phone talk to patients while at their home. The only thing I created was a system that allowed them to enter the database of these patients while working at home and while there with the kids.

Milan Jackson: I know that you also have a recycled plastic water bottle company and you have an athletic brand for plus sized women. What inspired you to start those two companies?

Kanessa Mulehah: Well the Kanessa brand the plus sized athletic brand was inspired by the Queens Football League. One thing I love about football is the fact that literally everybody type is welcome. Every woman can participate. She was welcomed into a group no matter what her physical condition was. I remember this line of women were bigger than the others. I saw them struggling with sportswear and they were all plus sizes. You could basically see everything from behind. You could see the color of their underwear and they were not aware. I thought, there’s something I have to fix, especially after my delivery with my first. I wanted to go back to the gym. I didn’t feel like myself; I had gained weight. And I said, “Okay, well, if I can’t find sportswear that would fit my body, why not make it myself. Why not come up with the solution like I always do myself!” So that’s when I started researching and the most annoying part for me was sagging leggings, especially because my bottoms are bigger than my waist. So, for that reason I mostly had to buy larger leggings, but they were also large on top. So, I thought that cannot happen to my brand. I came up with thinning waist, drawing string, and reinforced stitching in the inner thigh. I know for a lot of plus size women, the stitching fabric that damages between the legs is a big problem. I came up with the double fabric on the behind so it’s not see through. I basically worked through all the problems and I solve them.

Milan Jackson: How do you balance being a mom of two and a businesswoman?

Kanessa Mulehah: That’s a good question. I think my husband is a big help. We do everything 50/50 and I am so lucky to have my mom who helps sometimes whenever I need her. But for me, I think I’m so driven whatever I put my mind to. There’s nothing that can stop me. On the other hand, you also want to see your kids a lot. I have the luxury of having my kids with me at the office all the time. I see them a lot, but I do have to work at the same time. It’s really you have to multitask a lot. On the other hand, it’s also working at night and whenever they sleep to take that moment to finish all the work. I think working with schedules is a big plus. Set some goals every day and don’t go to bed before you finish them because it’s just going to be a lot of stress on the next day or the whole week.

Milan Jackson: Do you have any advice for people wanting to follow their passions?

Kanessa Mulehah: Well, I have a few. I can tell you the most important part looking back now; fear is just an emotion. Whatever your feeling is because of fear or you’re maybe insecure, it’s also actually fear that is within. You feel something that is stopping you but it’s just an emotion. Whatever it is you have to go through it. Become that person you want to be. Don’t listen to fear because it stops you from becoming who you would like to become.

Milan Jackson: How can our readers connect with you and your story?

Kanessa Mulehah: Well I am active on Social Media and I have a blog that people can read. I also write blogs every week on my Kanessa health platform but that’s mostly focused on health and my healthy lifestyle and working out as a plus sized woman. I also have a blog, but I stopped writing there because I basically told everything I want to tell. That’s basically my story how I was born in Ethiopia and we came to Holland as a refugee. I share my story. So, if people are interested, they can reach out to me on Social Media.

Milan Jackson: What are your business goals for the future?

Kanessa Mulehah: I would like to become the first professional women’s league ever because I’m so sick of men always on top in the sports world. I feel women are always forgotten compared to men in sports and for Kanessa’s brand, I hope to be as big as Puma’s brand or under Armor one day. 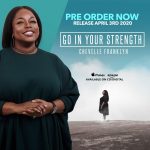 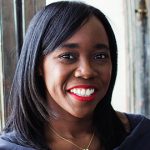